The theme of the 2022 Martin Luther King, Jr. events answers the call to focus on securing the most fundamental right to vote. We must organize, march, and use our every effort to protect this right.

The nineteenth century, transcendental reformer and abolitionist Theodore Parker, in an address entitled “Of Justice and the Conscience,” extolled justice as the “fundamental law of the moral universe, the law of right, the rule of [people] in all [of their] moral relations.”

His words, delivered in the throes of a young nation in deep conflict with itself, marching toward civil war, presented an outer and inner aspect of justice. As an external moral force, justice is an action upon which exists a law of the universe. Internally, justice is a ‘natural object’ of the human conscience, a conscience which naturally loves what is right. Thus, “love of justice is the moral part of piety.”

Parker also argues that just as there are natural, universal forms, there are artificial forms that pervert the object of justice for selfish ends, and thus, a neglecting of “moral culture.” Yet, for Parker, even amidst rampant human mismanagement, one can see “a continual and progressive triumph of the right,” a moral universe whose long arc “bends towards justice.”

On August 16, 1967, at the tenth annual meeting of the Southern Christian Leadership Conference, Dr. Martin Luther King, Jr., in an address entitled “Where do We Go From Here?” lauded the achievements made in the Black communities of Chicago, Illinois, and Cleveland, Ohio. But, he lamented how those achievements paled in the face of the endemic problem of racism and oppression beset in the nation and the world. He identified the problem this way, “Now the problem of transforming the ghetto…is a problem of power, a confrontation between the forces of power demanding change and the forces of power dedicated to the preserving of the status quo.”

King noted that power, at bottom, is “the ability to achieve purpose: the strength required to bring about social, political, and economic change.” But, what makes power truly powerful is love, that care for the dignity and innate humanness of the person. He states, “[p]ower at its best is love implementing the demands of justice, and justice at its best is love correcting everything that stands against love.” Thus, to be truly powerful is to carry out the requirements of justice with care and concern for the person always in view.

But how are we to carry out these requirements?

One of the follies of America lies in the nation’s legacy of white supremacy and racial injustice. This legacy is what Dr. King called in 1965 at San Francisco’s Grace Cathedral “the Negro’s burden and America’s shame.”

Because the ideals enshrined in America’s founding documents and fought out in its political corridors, courtrooms, and bloody battlefields had come face-to-face with forces determined to block the fulfillment of those ideals for the ever expanding American citizenry. This conflict was embodied most clearly in the fight for human, civil, and voting rights led by Dr. King.

We must organize, march, and use our every effort to protect this right.

In 2022, and beyond, let us each lend our voice to the national conversation about who we are and what we wish to be as a country, taking courage in the difficult work of uprooting embedded injustices and righting those wrongs.

While the road ahead may seem difficult, fight for justice and love over injustice and despair, because “the arc of the moral universe is long, but it bends toward justice.”

Note:
You can read Theodore Parker's address "Of Justice and the Conscience" at http://www.fusw.org/uploads/1/3/0/4/13041662/of-justice-and-the-conscience.pdf. You can find Dr. King's August 16, 1967 address "Where Do We Go From Here?" at https://kinginstitute.stanford.edu/where-do-we-go-here. 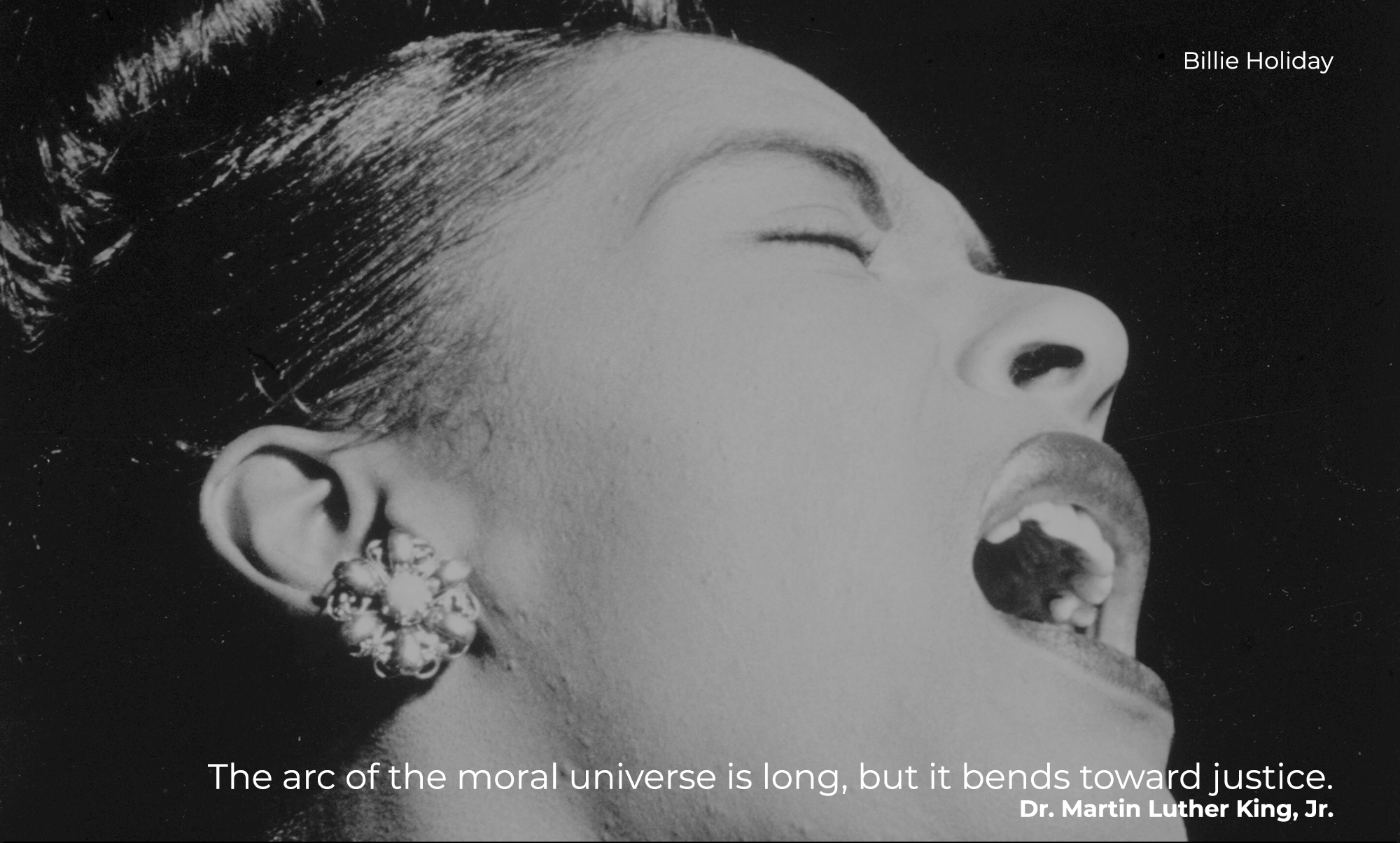 Toward Justice - The MLK Celebration of Freedom, Civil Rights, and Social Justice