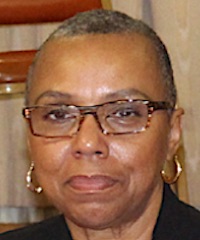 She joined the department in 1972, four years after riots destroyed parts of the city following the assassination of Martin Luther King Jr. At the time African-Americans made of 70 percent of the people living in the nation’s capital; at the same time, the police department was overwhelmingly white and police-community relations were strained. Fisher-Stewart’s decision to join the police force baffled friends and family. The department had a bad reputation, she said, and “my friends weren’t happy because some of them had had negative interactions with police here in D.C.”

She currently serves as the associate rector of Calvary Episcopal Church where she is the founder of the Center for the Study of Faith in Justice. The Center was founded with a grant from the Episcopal Evangelism Society.