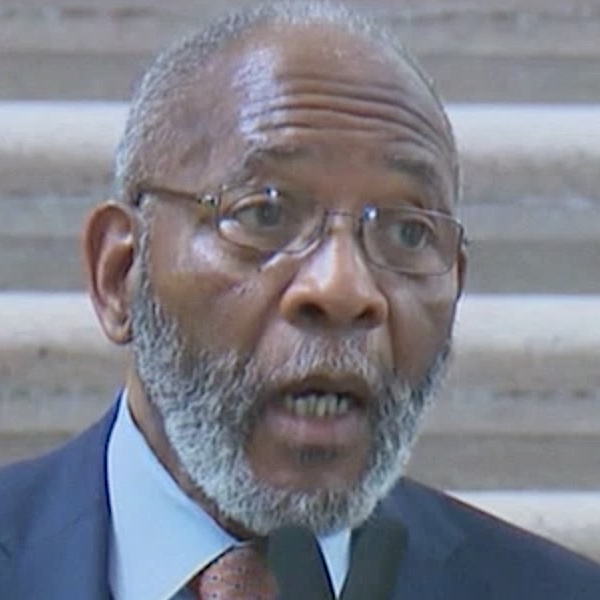 Amos C. Brown (born February 20, 1941) is an African American pastor and civil rights activist. He is the president of the San Francisco branch of the NAACP, and has been the pastor of the Third Baptist Church of San Francisco since 1976. Brown was one of only eight students who took the only college class ever taught by Martin Luther King Jr.

Brown became senior pastor of the Third Baptist Church of San Francisco in 1976. He has served as national chairman for the NAACP Youth and College Division and the National Baptist Commission on Civil Rights. He is president of the San Francisco branch of the NAACP. He is also on the board of directors of the NAACP. In 1991, Brown testified at the Clarence Thomas Supreme Court nomination hearings on behalf of the National Baptist Convention of America, the National Baptist Convention, USA, Inc., and the Progressive National Baptist Convention. He stated that the votes of the conventions were virtually unanimous in their opposition to the nomination of Thomas. Brown served on the San Francisco Board of Supervisors from 1996 to 2001. He was originally appointed by Mayor Willie Brown in 1996, then elected to a two-year term in 1999.[13] While a member of the Board of Supervisors, he proposed an ordinance that would prohibit standing on a street corner for more than five minutes, with loiterers facing a $250 fine and up to six months imprisonment. He failed to win re-election to the board in the year 2000. Brown said in an interview that the origins of the student sit-in movement has been "romanticized... or mis-stated". According to Brown, the first organized "sit-down movement", as it was then referred to, was in Oklahoma City in August 1958, led by the NAACP Youth Council. In 1961, Brown was arrested along with Martin Luther King Jr. at a lunch counter sit-in. He also joined the Freedom Riders that year. Brown is a supporter of LGBT rights. He spoke in favor of the California gay rights bill in 1991. He faced criticism from some black ministers for his support of same-sex marriage and opposition to Proposition 8 in California in 2008. In 2012, he joined the NAACP National Board in voting overwhelmingly in favor of supporting marriage equality. Brown supports the legalization of marijuana, and has called for more African Americans to have a voice in the medical cannabis industry. Brown has called for reparations to be paid to black people, to aid in economic empowerment and compensate for deficiencies in education. Brown volunteered for Operation Crossroads Africa in 1964, spending over two months on the west coast of Africa. He has visited the continent over 20 times since then. Under his leadership, the Third Baptist Church has sponsored many African refugees, and enabled 80 children from Tanzania to receive heart surgery in the United States.