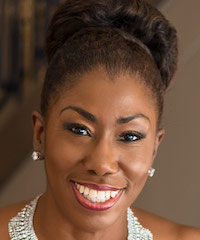 HOPE BRIGGS, a native of New Jersey, drew a rave review from Opera News for her San Francisco Opera debut as the Duchess of Parma in Busoni’s Doktor Faust “… Hope Briggs was stellar, delivering one of the evening’s highlights with her lusciously intoned, lovelorn aria.”