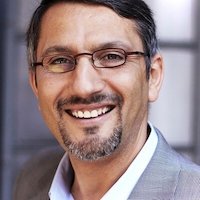 Hatem Bazian is a co-founder and Professor of Islamic Law and Theology at Zaytuna College, the 1st Accredited Muslim Liberal Arts College in the United States.

In addition, Prof. Bazian is a lecturer in the Departments of Near Eastern and Asian American and Asian Diaspora Studies at the University of California, Berkeley. Dr. Bazian between 2002-2007, also served as an adjunct professor of law at Boalt Hall School of Law at the University of California, Berkeley. He teaches courses on Islamic Law and Society, Islam in America: Communities and Institutions, De-Constructing Islamophobia and Othering of Islam, Religious Studies, and Middle Eastern Studies. In addition to Berkeley, Prof. Bazian served as a visiting Professor in Religious Studies at Saint Mary’s College of California 2001-2007 and adviser to the Religion, Politics and Globalization Center at UC Berkeley.