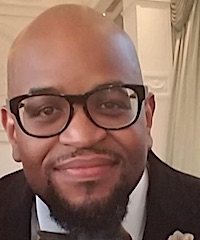 Eric Lewis Williams, Ph.D., is an ordained minister of the Church of God in Christ. He has taught history, religion and African-American studies at several institutions across the country.

Williams currently serves as the Curator of Religion for the Smithsonian National Museum of African American History and Culture. His current research examines the meaning of religion within Africana histories and cultures and the role and influences of African religions in the Atlantic world. Additional research and teaching interests include Black Christian thought, American religious history, religion and material culture, African diasporan religions, Pentecostalism and phenomenology of religion. Williams’ research and studies have taken him around the world. He considers himself a transatlantic commuter, a collector of words and an emergent jazzman in the world of ideas.

from the Religious Freedom Center