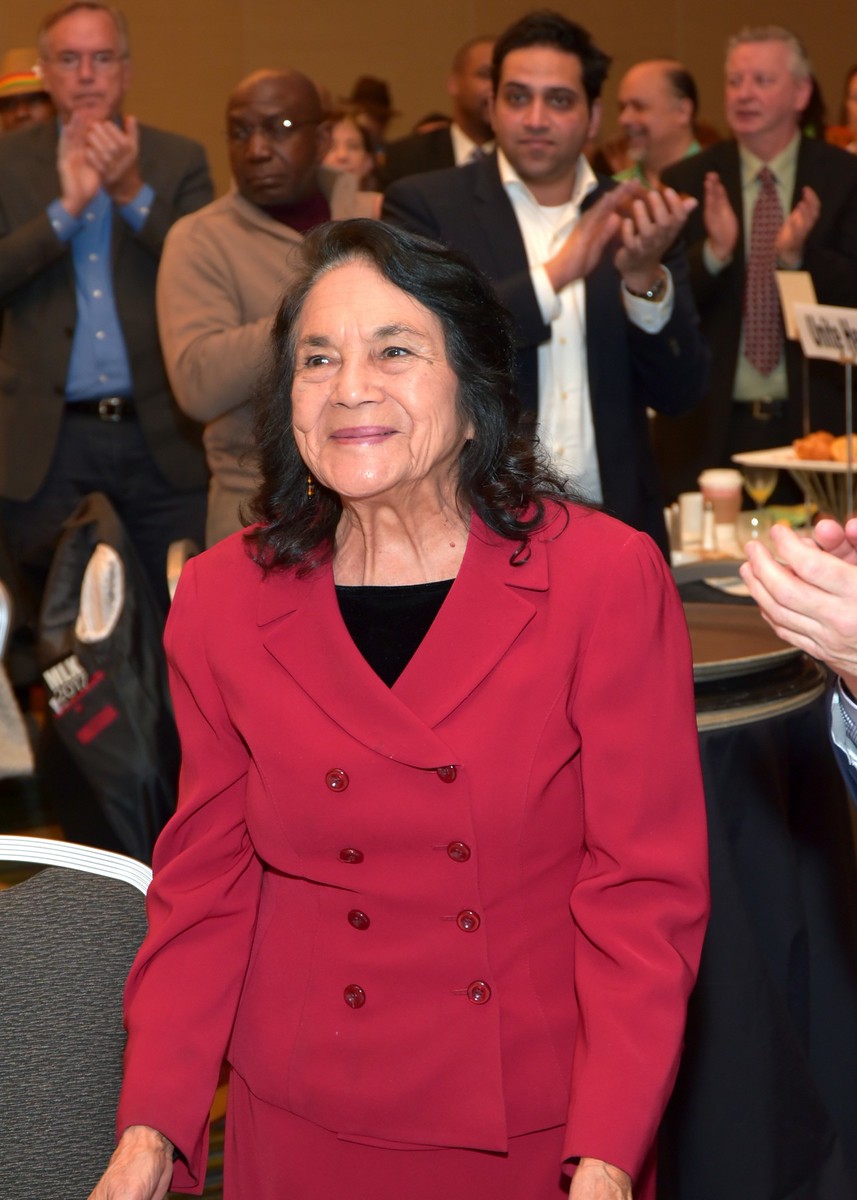 ## Dolores Clara Fernández Huerta is an American labor leader and civil rights activist who, with Cesar Chavez, is a co-founder of the National Farmworkers Association, which later became the United Farm Workers (UFW). Huerta helped organize the Delano grape strike in 1965 in California and was the lead negotiator in the workers' contract that was created after the strike.

Huerta has received numerous awards for her community service and advocacy for workers', immigrants', and women's rights, including the Eugene V. DebsFoundation Outstanding American Award, the United States Presidential Eleanor Roosevelt Award for Human Rights and the Presidential Medal of Freedom. She was the first Latina inducted into the National Women's Hall of Fame, in 1993.

Huerta is the originator of the phrase, "Sí, se puede". As a role model to many in the Latino community, Huerta is the subject of many corridos (Mexican or Mexican-American ballads) and murals.

In 1955, Huerta along with Fred Ross co-founded and organized the Stockton Chapter of the Community Service Organization (CSO), which fought for economic improvements for Latino/Mexican/Chicano migrant Farm workers. Due to her dedication and willingness to serve, Ross often delegated huge responsibilities to her. He knew she was capable of delivering the organization's message in Spanish and English and promoted the agenda from door to door field organizing. "As she assumed responsibilities and stance that were traditionally held by white males, Huerta encountered criticism based on both gender and ethnic stereotypes".

In 1960, Huerta co-founded the Agricultural Workers Association, which set up voter registration drives and pressed local governments for barrio improvements. In 1962, she co-founded, with César Chávez, the National Farm Workers Association, which would later become the United Agricultural Workers Organizing Committee. Huerta was the only woman to ever sit on the board of the UFW, until 2018. In 1966, she negotiated a contract between the UFWOC and Schenley Wine Company, marking the first time that farm workers were able to effectively bargain with an agricultural enterprise.

But Chavez and Huerta quickly realized that they shared a common goal of helping improve the lives and wages of farmworkers, so they co-founded the National Farm Workers Association. In 1962, after the CSO turned down Chávez's request, as their president, to organize farmworkers, Chávez and Huerta resigned from the CSO. She went to work for the National Farm Workers Association, which would later merge with the Agricultural Workers Organizing Committee to become the United Farm Workers Organizing Committee. "Dolores's organizing skills were essential to the growth of this budding organization." The Original UFW house is located in the city of Los Angeles.

At the age of only 25, Huerta was a lobbyist in Sacramento for the Stockton Community Service Organization and trained people to do grassroots organizing.

The foundation was later changed to an affiliated agricultural workers organization. In an interview, Huerta explained why she wanted to help the farmworkers. She explained, she was able to get an inside look at how the farm workers were living and they were by far the most poverty-stricken workers. She explained the farmworkers were being paid little to nothing, they had no rights, they slept on the floors, their furniture was wooden boxes, did not have clean water, access to bathrooms, would work from sunrise to sundown, and were not given any breaks. Many of these workers would migrate and traveled to where the crops were in season, meaning their children did not have a proper education and would often work in the fields along with their parents. She explained that many women were often sexually assaulted by the landowners but were in fear to speak up because their family needed a job. Huerta explained that many of these landowners would justify themselves by saying "we are doing the farmworkers and the public a favor by giving these people a job." she explained that the landowners had received the land and water for free and also expected the labor for free. After Dolores saw the conditions these people were living in, (shantytowns, and living in squalor) she joined the organization. She explained, laws must be passed in order for these people to get treated fairly which is why she worked hard and put constant pressure to get laws passed. With the help of the organization, she helped champion for the rights of workers in agricultural fields to ensure they were well paid and worked in better conditions.

In 1965, Huerta directed the UFW's national boycott during the Delano grape strike, taking the plight of the farm workers to the consumers. She led the organization of boycotts advocating for consumer rights. The boycott resulted in the entire California table grape industry signing a three-year collective bargaining agreement with the United Farm Workers in 1970.

In addition to organizing, Huerta has been active in lobbying for laws to improve the lives of farm workers. The laws that she supported included the following:

> 1963 legislation to extend the federal program, Aid to Families with Dependent Children (AFDC), to California farmworkers

> The 1975 California Agricultural Labor Relations Act
As an advocate for farmworkers' rights, Huerta has been arrested twenty-two times for participating in non-violent civil disobedience activities and strikes. She remains active in progressive causes, and serves on the boards of People for the American Way, Consumer Federation of California, and Feminist Majority Foundation.

On June 5, 1968, Huerta stood beside Robert F. Kennedy on the speaker's platform at the Ambassador Hotel in Los Angeles as he delivered a victory statement to his political supporters shortly after winning the California Democratic presidential primary election. Only moments after the candidate finished his speech, Kennedy and five other people were wounded by gunfire inside the hotel's kitchen pantry. Kennedy died from his gunshot wounds on June 6.

In September 1988, in front of the St. Francis Hotel in Union Square, Huerta was severely beaten by San Francisco Police officer Frank Achim during a peaceful and lawful protest of the policies/platform of then-candidate for president George H.W. Bush. The baton-beating caused significant internal injuries to her torso, resulting in several broken ribs and requiring the removal of her spleen in emergency surgery. The beating was caught on videotape and broadcast widely on local television news. Later, Huerta won a large judgment against the SFPD and the City of San Francisco for the attack, the proceeds of which she used for the benefit of farm workers. As a result of this assault and the suit, the SFPD was pressured to change its crowd control policies and its process of officer discipline.

Following a lengthy recovery, Huerta took a leave of absence from the union to focus on women's rights. She traversed the country for two years on behalf of the Feminist Majority's Feminization of Power: 50/50 by the year 2000 Campaign encouraging Latinas to run for office. The campaign resulted in a significant increase in the number of women representatives elected at the local, state and federal levels. She also served as National Chair of the 21st Century Party, founded in 1992 on the principles that women make up 52% of the party's candidates and that officers must reflect the ethnic diversity of the nation. *** `from Wikipedia`
| mlk2017