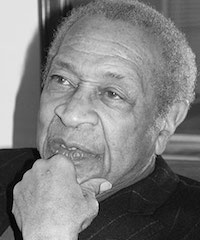 Dr. Charles H. Long was Emeritus Professor of Religious Studies, University of California-Santa Barbara, and past president of the American Academy of Religion (1973).

Dr. Long was born in Little Rock, Arkansas, during the time of legislated segregation. While his formative years were lived during a time of deep racial tensions, his life was nurtured within a crucible of Black intellectual excellence. He left Little Rock and volunteered for the United States Army Air Forces served in World War II. With strength of character, determination of will, critical intellect, and a commitment to academic excellence, he entered the University of Chicago earning the D.B. ‘53 and Ph.D. ’62, and was offered a faculty appointment at the University of Chicago Divinity School where he became a pillar in the framing of Religionswissenschaft (History of Religions).

In addition to serving as president of the American Academy of Religion (1973), he served as president of the Society for the Study of Black Religion (1987–1990); was a tenured professor and held endowed chairs at the University of Chicago, the University of North Carolina at Chapel Hill, Syracuse University, and the University of California, Santa Barbara; a director of doctoral programs and centers for Black studies; a collaborator in the founding of the History of Religions journal; an editor of book series and member of the editorial boards of several leading scholarly journals; a member of numerous professional organizations; and highly sought after lecturer until the day of his passing in 2020.

from the American Academy of Religion