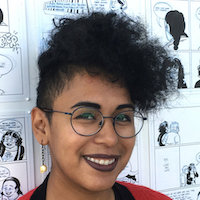 Breena Nuñez is an Afro Guatemalan-Salvadoran cartoonist based in San Francisco. -- She draws, prints, folds, and staples autobiographical comics and zines that center the nuances of existing as an Afrodescendiente from the Bay Area. Nunez is a part-time professor at San Francisco State University and California College of the Arts. Her hope as a cartoonist & educator is to help BIPOC communities give themselves permission to cry or laugh through the language of comics and to value the stories they want to share. Her comics can be found in publications such as The New Yorker: Daily Shouts and The Nib, as well as anthologies like Tales From La Vida: A Latinx Comics Anthology, Drawing Power (Eisner Award Winner 2020), and Be Gay, Do Comics! (Ignatz Award Winner 2020). *** `from breenanunez.com`
| bcaf2019 | bcaf2020 | bcaf