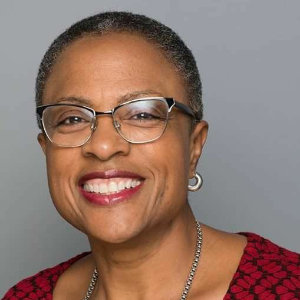 Yvette A. Flunder is an American singer and senior pastor of the City of Refuge United Church of Christ in Oakland, California and Presiding Bishop of The Fellowship of Affirming Ministries. -- Flunder was born in San Francisco, California and raised in the Church of God in Christ. In 1984 she began singing and recording with Walter Hawkins and the Love Center Choir, where she was the lead singer. She was later ordained by Hawkins. In 1986, Flunder was moved to begin working with and ministering to people with HIV/AIDS in response to the epidemic of the 1980s. She founded several not-for-profit enterprises in the San Francisco Bay Area, providing services for people affected by HIV: Hazard-Ashley House, Walker House and Restoration House, through the Ark of Refuge, Inc., which later became the Y. A. Flunder Foundation. In 1991, she founded the City of Refuge under the United Church of Christ, "in order to unite a gospel ministry with a social ministry". She describes the City of Refuge UCC as an effort to "create a spiritual community that will embrace our collective cultures, faith paths, gender expressions, and sexual/affectional orientations while simultaneously freeing us from oppressive theologies that subjugate women, denigrate the LGBT community, and disconnect us from justice issues locally and globally". The Transcendence Gospel Choir was a community choir affiliated with the City of Refuge and was the first all-transgender choir in the United States. *** `from Wikipedia`
| kfl | King and Faith | MLK2014