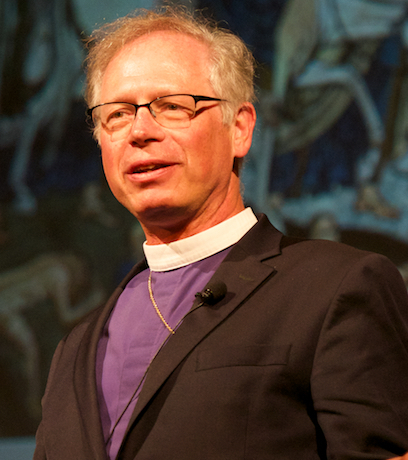 The Right Rev. Dr. Marc Handley Andrus is the eighth bishop of the Episcopal Diocese of California. He was installed as bishop in 2006 — a position of oversight for a diocese comprised of 24,000 communicants in Alameda, Contra Costa, Marin, San Francisco, and San Mateo Counties, and the cities of Los Altos and part of Palo Alto. Prior to his election as Bishop of California, Andrus served as Bishop Suffragan in the Episcopal Diocese of Alabama.

Marc Handley Andrus was born on October 20, 1956, in Oak Ridge, Tennessee, to Mary Frances and Francis Andrus, and was raised in Kingston, Tennessee. He received his Bachelor of Science in Plant Science from the University of Tennessee, Knoxville in 1979, and a Masters in Social Sciences from Virginia Polytechnic Institute and State University, Blacksburg in 1982. After receiving his master's degree, Andrus went to work as a regional planner for the Accomack-Northampton Planning District Commission on Virginia's Delmarva Peninsula.

In 1987, Andrus was awarded a Master of Divinity degree from the Virginia Theological Seminary in Alexandria, Virginia. After being ordained deacon on June 20, 1987, Andrus became senior associate at Church of the Redeemer in Bryn Mawr, Pennsylvania. While at Church of the Redeemer, Andrus was ordained priest on April 25, 1988. In 1990, Andrus became Chaplain at Episcopal High School in Alexandria, Virginia, until 1997 when he became Rector of Emmanuel Church in Middleburg, Virginia. He remained rector of Emmanuel until his consecration as Bishop Suffragan for the Episcopal Diocese of Alabama on February 7, 2002.

His leadership has focused on key issues related to peace and justice, including immigration reform, civil rights for LBGTQ+ persons, health care, and climate change. Early in his tenure at the diocese, Bishop Marc co-chaired a community coalition that paved the way for the rebuilding of St. Luke’s Hospital in San Francisco. More recently, his climate advocacy work has taken him to the UN Climate Conferences in Paris (COP21), Marrakesh (COP22), Bonn (COP23), and Katowice, Poland (COP24), as well as the Dakota Access Pipeline demonstrations at Standing Rock, North Dakota.

Bishop Andrus is a member of the We Are Still In Leaders' Circle, a diverse group of ambassadors for American climate action. He also serves on the boards of the Episcopal Impact Fund, the Episcopal School for Deacons, Episcopal Community Services, the Bishop's Ranch, St. Dorothy's Rest, and the American Bach Soloists, among other organizations.

Andrus is married to Sheila Andrus, Ph.D., former director of the Sparkman Center at the University of Alabama at Birmingham's School of Public Health, and they have two adult daughters: Chloé and Pilar.