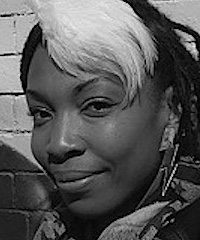 Afua Richardson is an African-Native American artist. -- She did covers for five issues of Marvel's World of Wakanda and art for a short story backup in the first issue. Her comic, Genius, with writers Marc Bernardin and Adam Freeman won Top Cow's 2008 Pilot Season. She illustrated a Langston Hughes poem in 2014 for NPR's Black History Month, and did variant covers for several comic book titles including All Star Batman for DC comics, Attack on Titan for Kodansha, Mad Max for Vertigo, as well as covers/variant covers for X-Men '92, Totally Awesome Hulk, Shuri, and Captain America and the Mighty Avengers at Marvel Comics. She was one of a small group of African American women artists who were employed by the "big two" comic publishers at the time she entered the industry. *** `from Wikipedia`
| bcaf2015 | bcaf